Biodiversity in a changing world 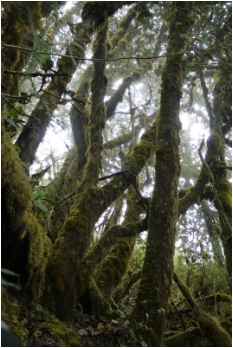 ​The tropical montane cloud forests of Peru are some of the most diverse forests in the world. As one moves upslope from the lowland jungles to high elevation treeline, climatic patterns change rapidly over short distances. Many species along this slope are adapted to live in a narrow range of elevation, which is associated with a small window of temperature and precipitation. As the global climate continues to change, species will need to migrate up or down slope to stay within their climatic envelope to which they are adapted. Understanding how, and if, species migrate in response to climate change is a pressing question that will help determine the fate of many species in a changing world. Using the cloud forests of Peru as a model system my work attempts to determine the fate of biodiversity under future climates.

This work is part of a collaborative research group among many US and international universities. For additional information please see the group's research page and the other exciting research going on in Dr. Kenneth Feeley's lab at the University of Miami. 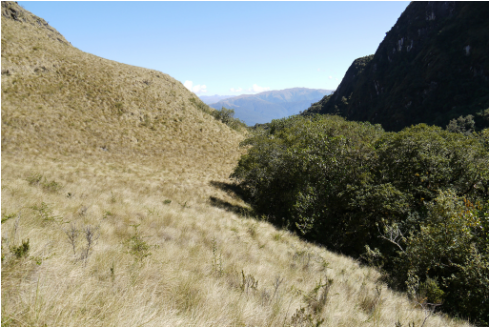 A typical abrupt tropical treeline ecotone in the Peruvian Andes
Tropical treelines represent the sharp transition from closed canopy cloud forest to open alpine vegetation and occur at elevations between 3500-4500 meters above sea level throughout much of the Andes. The treeline ecotone can be an important climate indicator as it marks the point where climate becomes cold enough that non-woody vegetation such as grasses is favored over the upright woody stems of trees. If treeline elevation is determined by temperature then any increase in global temperatures should cause treelines to shift further upslope. However, despite rising temperatures over the past 100 years, tropical treelines remain remarkably stationary.

I am using a series of experimental, observational, and modeling studies to determine which aspects of climate affect tropical treeline distributions. I focus on t﻿emperature extremes rather than mean temperatures to see how species and the treeline ecotone will respond to ongoing and future climate change 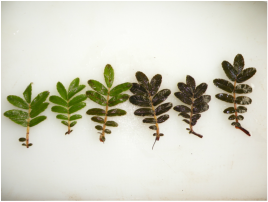 Leaves of Polylepis pauta which have been subjected to different temperatures. The 3 leaves on the right were killed by freezing temperatures while the 3 on the left were able to survive
What limits species ranges has long been of interest to ecologists. In warm climates such as those found in the lowland tropics, range limits are often thought to be determined by biotic interactions such as competition or herbivory. In colder climates such as high elevations, species' ranges may be limited by abiotic factors rather than biotic factors. Using simple freezing assays and seedling transplant experiments I am determining which is more important in determining the upper elevational distributional limits of cloud forest species, mean temperature or low temperature extremes.

This work is in collaboration with Dr. Christian Körner, Dr. Günter Hoch, and colleagues at the University of Basel, Switzerland.